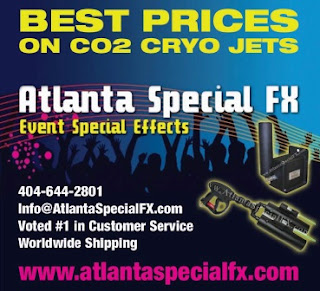 When talking about a CO2 Jet, you may have heard many names used before or you may have not. Whether you have or not, we will clarify some of the confusion here and get the nitty gritty on what each of the names means and how they relate to what you has become the focal point of todays special effects industry for both DJs and Nightclubs. When searching for a Cryo Cannon online you may have seen "CO2 Jet Blaster", "Handheld Cryo Gun", "Cryo Jet", or "C02 Jet" and have instantly become confused as to what the difference is between them.

First off, there is a difference between each one and therefore some things should be taken into account before following through with a click on that link titled "CO2 Jets For Sale". Essentially you have two categories, mounted and non-mounted jets, otherwise called handheld units. The handheld cryo gun falls into this category as by its name and of course its build since it is more like a fog sprayer than anything else. The mounted category contains the rest of the names mentioned above, Cryo Cannon, C02 Jet, CO2 Jet Blaster, Cryo Jet, and CO2 Jet. As a side note, all the units here fall under the special effects category and are used for special fx only.
So now onto the difference between the 5 names that sound so much alike. To start, a CO2 Jet, mistyped C02 Jet with a zero before the 2, is merely a piece of equipment that sprays Liquid Carbon Dioxide out of it to create white fog that is very cold. CO2 is the proper abbreviated name which has to do with the checmical makeup, therefore displaying the 2 in the name (ex. CO2 Cannon). A CO2 Jet Blaster is simply a CO2 Jet, but can be a higher output model, hence the "Blaster" at the end. For Cryo Cannon and Cryo Jet, these are names which have come to attention as the word "Cryo" means "Cold" or "Of Low Temperature". So when used in names such as Handheld Cryo Gun, Cryo Cannon, and Cryo Jet it is referring to low temperature output of what the unit will be spraying.

Having clarified the nomenclature of the names, we have a better understanding of what means what. With this said, and to get very technical with it, a CO2 Jet would be different from a Cryo Jet in the sense that the first deals with CO2 only and the second deals with anything cold. The same would go for Cryo Cannon and CO2 Cannon as well. We've already covered the mistype of C02 Jet so that's handled and out of the way. The CO2 Jet Blaster being a higher output model of a regular jet covers that name. The Handheld Cryo Gun name suggests it can sprray anything cold, but should only be used for spraying liquid carbon dioxide and not Liquid Nitrogen or anything else as it could ruin the machine. Another pointer to be made about this name is a Cryo Gun is also used in the medical field to freeze skin defects such as warts. You will want to make sure you are getting a special effects model such as the one pictured here at http://www.atlspecialfx.com/collections/co2-cryo-fog-smoke
Share 0 Tweet 0 +1